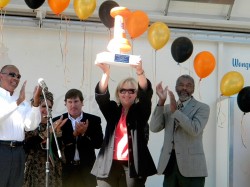 The 100 Best designation recognizes those communities that make youth a priority by implementing programs that help keep children in school and prepare them for college and the 21st century workforce. Troup County stood out among applicants nationwide for its success in collaborating efforts to address the educational, physical, social, and emotional needs of children. Specifically, Troup County has succeeded in raising the graduation rate, lowering the incidents of abuse, and preparing children not only for entering school but also for opportunities upon graduation.

“The progress being made in Troup County is certainly validated by this tremendous honor,” said Willis who coordinated the application process along with Catherine Kostilnik of the Center for Community Studies. “The efforts being made by organizations throughout the county for young people are showing real results in terms of educational success, social growth, improved safety and health, and growing opportunities. I am proud of the collaborative spirit that exists in our county among so many organizations and people who see areas of need and roll up their sleeves to be part of the solution.”

The competition is open to all communities that make children and youth a priority. In addition to enhancing local educational opportunities, most winning communities have taken steps to facilitate improved access to health care for its young people, encourage youth civic engagement and supply developmental resources that create better places for young people to live and grow. The entire 2010 list of 100 Best Communities for Young People and their accomplishments can be found at http://www.americaspromise.org/100Best.

“Through its innovative and far-reaching programs, Troup County is taking bold and effective steps to help their young people graduate and lead healthy, productive lives,” said Marguerite W. Kondracke, America’s Promise Alliance president and CEO. “Troup County serves as an example to inspire and educate other communities across the nation to tackle the challenges facing their city and children, and to implement initiatives that give them the essential resources they need to succeed in life.”

Troup County was named one of the nation’s 100 Best because of the community’s long-term approach to addressing the challenges young people face by engaging them from birth to adulthood. Troup BELL (Building Early Learners for Life) was created as a cross-sector collaboration between Troup Family Connection, the Chamber of Commerce, Troup County School System, United Way, local health agencies and education programs, to provide early-learning education for at-risk children and their families. Believing that education is the solution to ending the cycle of poverty, the community created BELL to ensure that all children enter kindergarten ready to learn by providing resources and support during the critical early years of a child’s life.

Troup County also aims to reach young people during the decisive period before a child enters high school. The school district has partnered with the Troup County Health Department and Communities In Schools to work with young people who are most at-risk for leaving school by providing a mentoring program for students in grades 6-8. Students have been identified to work with formally-trained mentors who will provide support and guidance through graduation. Realizing that parents are perhaps the most significant figure in a child’s life, Troup County School System has adopted an initiative to engage parents through the “Be There” marketing campaign emphasizing the importance and value of parental involvement.

The nationwide recognition ceremony, which Willis and Youngblood attended, took place in front of the Washington Monument on the National Mall in Washington D.C. Each of the winning communities was formally recognized with a designation on a map of the U.S., illustrating the geographic and demographic diversity of the winning 100 communities. In addition to the 100 Best distinction, Troup County and the other top communities will receive two road signs identifying the city as one of 100 Best, as well as a trophy to be presented to local officials at a community-wide event to take place in October.

Alliance Chair Alma Powell and President and CEO Marguerite W. Kondracke revealed the list of winners during the national celebration. They were joined by Rhonda Mims of the competition’s presenting sponsor, ING, and Twilight’s Kellan Lutz, who both share a passion for the development of young people.

The competition is one element of the Alliance’s Grad Nation campaign, a 10-year initiative to mobilize all Americans to take action in their communities to end the high school dropout crisis and prepare young people for college and the 21st century workforce. More than 7,000 students drop out each school day in the U.S., resulting in 1.3 million young people a year. To help decrease these numbers, the Alliance is more committed than ever to recognizing communities – regardless of size, location or history – that are taking real action to help more young people stay in school and graduate on time.

About 100 Best
First held in 2005, 100 Best honors communities large and small, rural and urban, that are making progress to help young people achieve their potential, which includes earning a high school diploma, securing a good job, and playing an active, productive role in America’s economic vitality. This year, more than 350 communities in 50 states registered online for the 100 Best distinction at http://www.americaspromise.org/100best.

Being a 100 Best community not only demonstrates commitment to local young people; the award fosters local pride, bolsters economic development and shines the spotlight on the people and programs that are building better communities. The competition also facilitates the sharing of best practices among communities nationwide regarding education, access to health care, reading score improvement, youth service and pre-school enrollment, among many other areas.

About America’s Promise Alliance
America’s Promise Alliance is the nation’s largest partnership organization dedicated to improving the lives of children and youth. Through the collective power of our partner network, we raise awareness, support communities and engage in nonpartisan advocacy to ensure that young people receive more of the fundamental resources they need to graduate high school prepared for college, work and life. Building on the legacy of our Founding Chairman General Colin Powell, the Alliance believes the success of our young people is grounded in the Five Promises—caring adults; safe places; a healthy start; an effective education; and opportunities to help others.  For more information about America’s Promise Alliance, visit http://www.americaspromise.org.